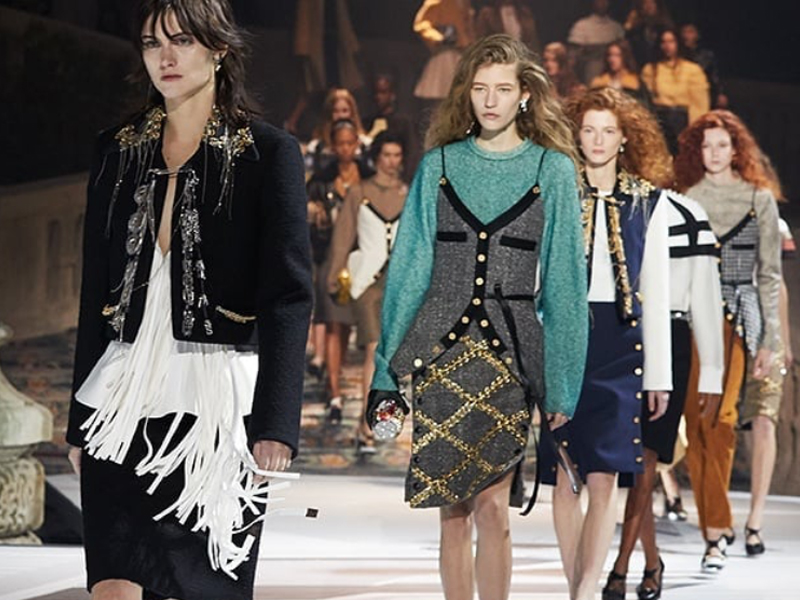 Louis Vuitton ends fall fashion season with a majestic display, leaving no-one untouched. A show circulated around time-travel, we saw the collision and mixture of different periods of fashion. For their Fall/Winter collection, Louis Vuitton embraces the past, and anticipates the future.
The show took place at the Louvre, in their The Cour Leful once made for Napoleon III, and similar to last season, incorporated the historical venue into the clothing and story of the collection. The models walked down a wide ramp onto a space ship-like deck where futuristic styled pieces were worn along side traditional styles.
The collection was a breath of French elegance with a touch from the future.
Shirtdresses were updated with asymmetrical snaps. Blouses and shirts were given a futuristic touch with shoulder-spanning stripes. Jackets cropped with decorated shoulders, while skirts and trousers were kept in a classic silhouette. The past on the bottom paired with the future on the top.
This seasons accessories followed the time colliding theme, mixing tradition with a futuristic touch. A new style in the form of a motherboard circuitry-like print could be seen on the bags, whereas the traditional high-heels had been updated with a graphic harness strapped around the foot.
This collections clothes not only make the wearer feel confident and strong, but she is empowered. She is the woman of our time, in the past and in the future.
Here is our favourite looks and details from the show:

#LVFW18 First Look. Watch the #LouisVuitton Show by @NicolasGhesquiere now on Instagram Live and at louisvuitton.com.