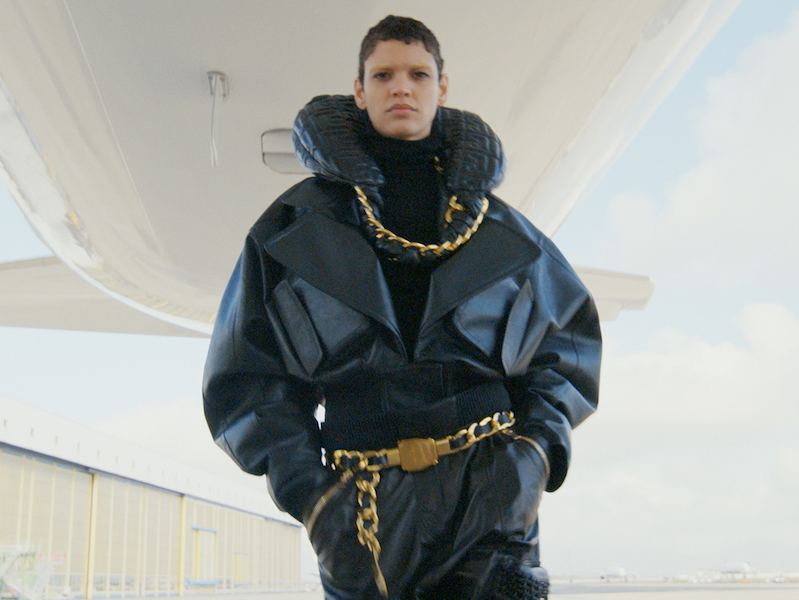 “Many of our designs riff on the distinctive beauty found in the uniforms of early pilots and astronauts, with takes on parachute dresses, lace-up flight boots, bomber jackets and shimmering anti-g jumpsuits. One particularly striking design relies on over 68 thousand upcycled Swarovski crystals, making very clear our atelier’s success in mixing luxury embellishments with these aviator inspirations”.

The collection was presented through a video in which we can see the models walking above and below the wing of a Boeing 777-300 and in front of the Air France infrastructure for maintenance. Each scene is a build-up that eventually leads to a deep desire for freedom and escape. It is the hymn to the feeling of freedom that produces the takeoff of a plane and the happiness of discovering a new place.

The house of Balmain is no stranger to collaborating with airlines. In 1972 Pierre Balmain designed the uniform for the Singapore Airlines flight crew and in addition to that 1975, Air France’s first female pilot Danièle Décuré wore a uniform produced by the French luxury house.

Perhaps, this collaboration was an homage to Balmain’s roots.

“I insisted on pushing the envelope a bit for our Fall 2021 video — because today, as we move forward, we need to always dream big, remain optimistic, and consider all possibilities,” says Olivier Rousteing.