Today we want to introduce a new hotel to you. The “east – Restaurant, Bar, Lounge and Hotel” in Hamburg, Germany.

Design Gastronomy in the Center of Hamburg

Party-goers may describe it as ‘the best location for good times and nightlife in Hamburg’, but for architect Jordan Mozer it encompasses ‘rooms that bring joy’.
Having opened in October 2004, the east is a refreshing addition to Hamburg’s cuisine culture and nightlife, and a superb inspiration for many designers. With its fascinating location and sophisticated appreciation of cuisine and hotelry, the east is a truly gastronomic experience for the discerning guest.

The sun rises in the east – what’s more heart, eyes and mouth all open, waiting to discover the splendors of the restaurant, bars, lounges and rooms. All this in the center of Hamburg, close to the city’s famous Reeperbahn.

It is different and daring, precisely the features that make the east a top address, a stunning design restaurant and a hospitality destination, defining itself by its appeal, its charisma and its culinary delights. Restaurant seating for 230 guests, 128 rooms, open for ten years – all this would not be possible without the people who make it work. This is chiefly down to the creative genius of Christoph Strenger, who, together with his partners heads a team of 280 hotel and restaurant staff.

The east is famed for its innovative design, forged by Jordan Mozer who has managed to couple Far Eastern charm with Western industrial history to create a cross-cultural oeuvre. Or more simply: Asia meets housebricks.

When it comes to its cuisine, east is a potpourri of Asian fare, sushi, with Mediterranean and regional influences and a touch of ‘fresh and fair’ – as are all the delights that leave head chef Tell Wagner’s kitchen.

And its guests are just as colorful: men and women from 20 to 60, in jeans or in suits, German students next to American business people – a congenial atmosphere accompanied by chill-out sounds or soft electro-pop. A celebrity or two may also be sighted in the Yakshi Bar or in the Smirnoff Lounge, while a conference may be taking place in the private cinema. The east also celebrates regular events and parties, whether for friends of the hotel or as client-organized events, such as for the Michael Stich foundation.

The east Sporting Club caters for active health needs and the spa area – with its sauna, massages and facial treatments for women and men – for a feeling of well-being.

Hardly a wish is left unfulfilled in this small east cosmos, with its truly special nuance for space and time.
Not only does the sun rise here – if you let your mind wander, it will shine the whole day. 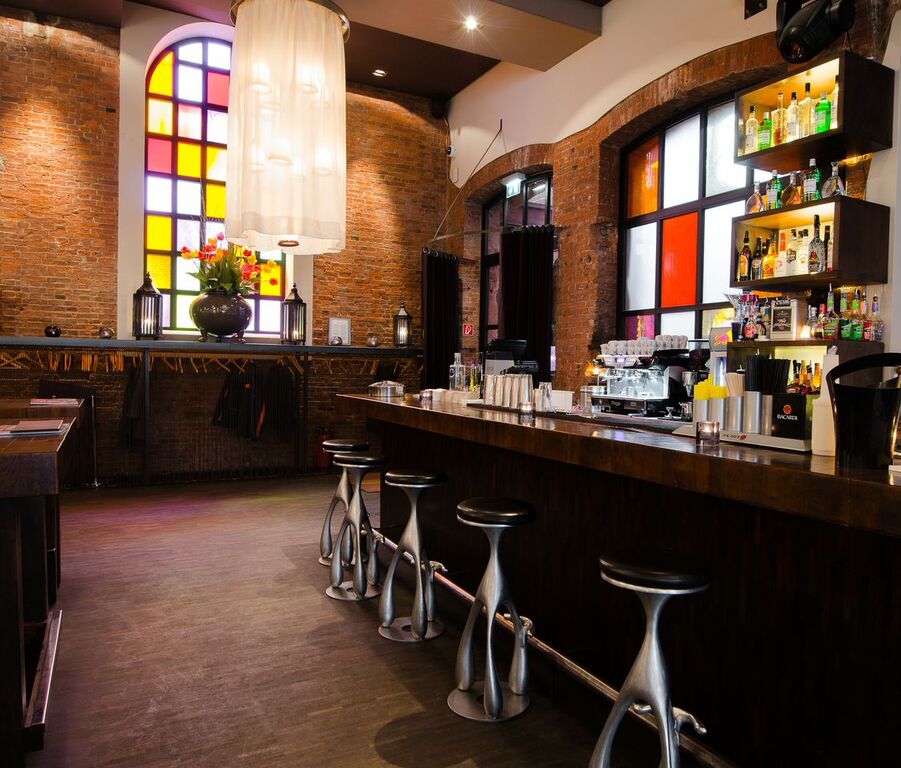 COAST by east & Sansibar Wine open in Hamburg and Majorca

Idyllically set on the end of Port Adriano’s inner harbour wall, COAST has opened its doors. Following the opening of Sansibar Wine, the new gastronomic sensation is now complete. In Hamburg the restaurant direct on the River Elbe close to the new opera house will embrace a grill station and the famous east sushi bar. Plans include a unique wall covered with real plants in the middle of the restaurant.

Eating, drinking and having fun the east way! The next Kitchen Party is scheduled for 6th of May 2015. Variety is the motto with small tasters available throughout the evening. Help yourself to the sushi and sashimi buffet at the Sushi Bar from and take a peek at the work of the sushi chefs. If you want to experience head chef Tell Wagner and his team at work, pick up your food from the kitchen and admire the various ‘live cooking’ stations. Top wines from a variety of wineries accompany you through the evening.

As with the balls and the legendary east New Years Eve parties, dance classics keep the dance floor simmering. Entry is free, but get there early to secure the best seats at the bar.

Sleeping in the east

Divided into five categories, the different rooms are available on five separate floors with melodious names such as Mandarine, Ginger, Jasmine, Cinnamon and Lotus, that even smell like this. The floor Aqua offers waterbeds.

Guest can choose a croissant breakfast or the generous breakfast buffet is available in the restaurant.

Through its proximity to the trade fair site, Reeperbahn and city centre, as well as its status as a design hotel, the East anticipates a diverse array of domestic and international customers, from business to leisure guests. One thing all visitors to the east rightly have in common is the demand for an excellently operated establishment, that is not just meant for sleeping.

In addition to the centrepiece, the restaurant with Asian lounge and relaxation garden, and the Dedon Island in the courtyard, Yakshi’s Bar, the Colours Lounge and the Smirnoff Lounge are available for many occasions. The east is the place to experience pleasures of the pallet and good for body and soul!

The kitchen team takes its guests on a culinary and aromatic trip through the cuisine of the east with “family style” Euro-Asian food. This concept is based on lively communication while dining. In the “sharing food system” everyone can try different dishes from everyone else, you share your food and thus experience different pleasures. The bar offers unusual cocktail creations with Asian ingredients and an extensive selection of wines for different moods. Here, too surprises, the unfamiliar and exceptional highlights are the aspirations of the east. 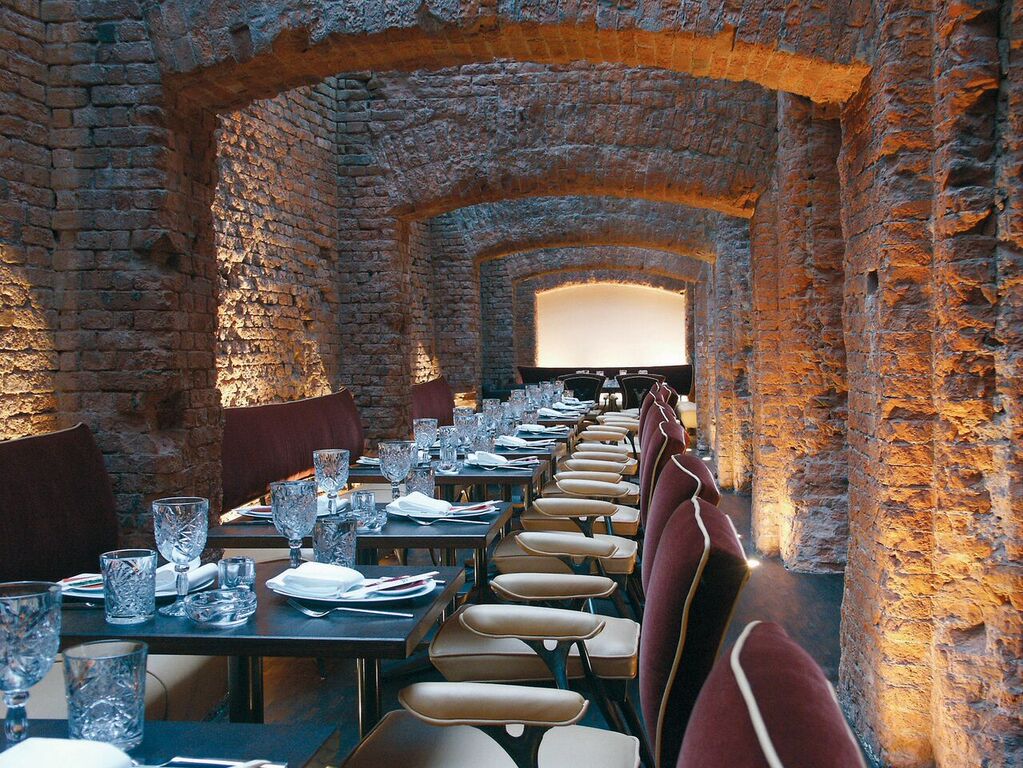 For talks or presentations, the beautiful new east cinema, with space for about 80 guests, gleams in brown and beige, refined in cowhide. Thanks to its state-of-the-art technology, the cinema’s picture and sound quality is often superior to that of some professional theaters. The east cinema houses an LCOS full HDTV projector. The sound system uses THX Ultra2, making it possible to reproduce various digital formats such as Dolby Digital, Dolby Pro Logic and Dpl II from DVD and audio. The sloping rows with their end-to-end benches provide an unrestricted view of the 4.5 meter x 2.25 meter (5 meter diagonal, 16:9 format) screen.

The new east cinema is likely to enthrall its guests with film shows, mini-premieres with an ensuing film party in the foyer, sports broadcasts and concerts.

For more balance, satisfaction and love of life the visitor to the east treats himself to a few hours of relaxation in the sauna, on the 40m2 roof deck, in the fitness room or in the wellness area – not just for hotel guests! Round, organic shapes provide flowing energy all around. The sauna was especially designed for the east by Jordan Mozer.

The east has a lot on the agenda in the area of cosmetics and wellness treatments:
Different facial treatments for every type of skin, lymph drainage therapy, whole body massage and partial massage, diverse body treatments, Java Touch, Zulu and much more.

The unique sporting club has followed the east credo by setting benchmarks in design, service and content that open up new dimensions. The club represents something special: well-being in an extraordinary setting, modern equipment, personal training and an unusual membership structure.

Covering 1,200 square meters and including a rooftop terrace, a sauna specially built for the club, bio-sauna and steam bath and with top-quality TechnoGym sports equipment, this is most sought after sporting club in downtown Hamburg.

Besides all this, there is a singularly styled multi-function room for indoor cycling, kinesis and other courses such as yoga, mental balance training, pilates and the more traditional aerobic sports.